If you suspect your hormonal contraceptives cause various psychological issues, your assumption is not wild at all. The scientists from the Faculty of Healthcare Service and Medical Sciences of the University of Copenhagen undertook a large-scale 13-year study that managed to trace the link between oral contraceptives and depression. 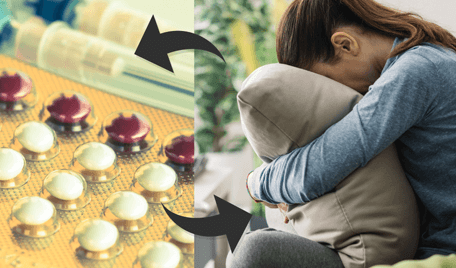 Danish gynecologists are determined that depression level rises in case of contraceptives regular administration. They came to this very conclusion after they analyzed many women from 15 to 34 years old. To conduct this research the doctors collected and thoroughly studied prescription products – both antidepressants and hormonal pills.

It was also discovered that different types of pills influence body in a different way. In case of combined oral contraceptives (COCs) that consist of estrogen and progestin, 23% of patients who used them were more likely to suffer from depression. Women, who were taking the mini-pill with progestin only, were 34% more likely to reveal symptoms of psychological disorder. Teenage girls represent the highest risk group: COCs provoke 80% likelihood of depression and the progestin – only contraceptives double this index. Unfortunately, if you are looking for hormone-based alternative to pills, there is bad news – all of them increase the risk to suffer from psychological disorders.

Why Contraceptives Cause Depression?

Sometimes it is hard to identify deep-root causes of depression. The reason is also stems from the fact that the majority of women live in constant stress and experience latent depression before any type of oral contraceptive is prescribed. Consequently, there can be a number of purely psychological factors causing depression that are not associated with the changes of hormone nature.

“The woman of 27 years old experienced a sensation of unreality and fear after she started to take hormonal contraceptives. When she finished drug intake, she started to suffer from panic attack.” the Scandinavian magazine of obstetrics and gynecology “Acta Obstet Gynecol Scand” stated (1992 Jan;71(1):78-80).

The instructions to hormonal contraceptives sometimes contain psychological disorders as side effects. Depression and anxiety are the most common effects. Panic attacks are not outlined because they are generally classified as anxious disorders. While they definitely must be considered precisely as far as many women suffer from them.

According to the research conducted by the Royal Society of General Practitioners, women taking hormonal contraception are at increased risk to suffer from mental aberration, neurotic depressive disorder (10%-40%), development of insanity and suicide. In addition, aggression multiplies and considerable changes of the mood and behavior are noticed.

In case you observe signs of depression provoked by antifertility agents, you should consult your doctor immediately. It is recommended to take vitamin B complex as a precaution of depressive syndrome emergence.