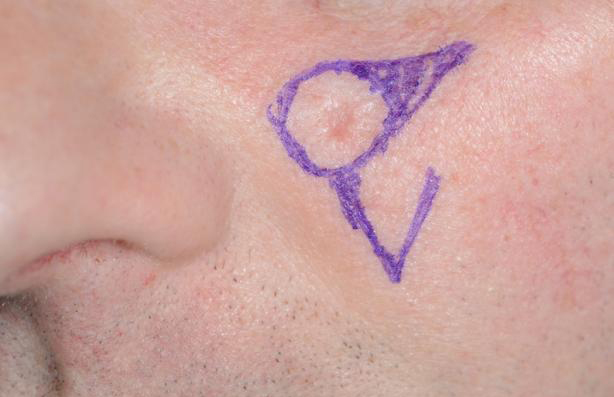 Skin cancer is the most spread form of cancer in the world and forms out of skin cells (epithelium). Among two most popular types of disorder there are rodent cancer and squamous cell carcinoma of the skin. Quite frequent the illness proceeds without evident symptoms, however sometimes there is possible bleeding, painful swelling. It may seem as surface erosion, wart, or hardened plaque with blurred boundaries. The most popular place of its appearance is open parts of hear skin and neck, especially the lower lip.

The disorder is formed out of basal layer of epidermis in the form of small nodules, which is constantly increasing in the size. It looks like a small highly painted reddish spot. It may also be presented by shelled plaques of red or yellow color.

The illness may appear in the result of excessive sunbathing or have dark skin. Those who are subjected to the illness may have light tones of skin, hair and eyes. Any member of the family might deliver the illness. People above 50 years old may receive it.

After the appearance of any suspicious spots or variations, you should immediately address to doctor, because its form of cancer is very dangerous, but the treatment is better to start from the early period. In case of delayed treatment cancer cells may spread on the other tissues and organs.
The most spread evidences of the illness are the appearance of neoplasm, changes in the existed condition of the skin, injuries which are not subjected to treatment. Of course far not all neoplasm’s is a skin cancer, even in combination the symptoms may simply say about the appearance of moles. The emergence of cancer depends on many characteristics, but certainly not all. It is impossible to prevent either accidental or the inherited gene changes that lead to continuous cell division. Cancer is inevitable in these cases.

In order to avoid the danger of this illness you should avoid sun exposure from 10 am to 4 pm. It is necessary to wear a hat, long-sleeved clothing and trousers to protect from sunlight. Remember that during the year, when going outside, use sunscreen with a factor of sun protection. Find out some information about how skin cancer looks like. Better of all is to check it every month.