Understanding a mental illness is a something that most of us have no idea how to master. Neither it is simple in terms of how it comes and goes on, nor the existing stereotypes and visual (often media-induced) images make it more clear. 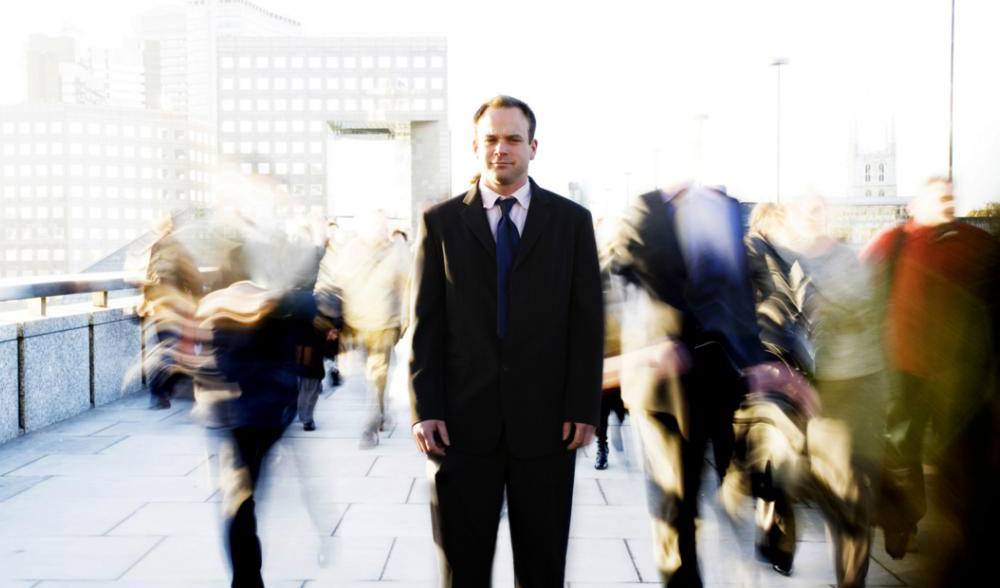 Understanding a mental illness is a something that most of us have no idea how to master. Neither it is simple in terms of how it comes and goes on, nor the existing stereotypes and visual (often media-induced) images make it more clear.

Besides, there is a stigma to it; and it mars an attempt at understanding to a very great deal.

One of the major things that should be realized when it comes to mental health is that people experiencing problems in this department are prone to both feel and think (and act) in a different way that when the same people do normally.

To those who are around their behaviour frequently seems irrelevant and their problems are perceived as imaginary; however, for the person with a mental health issue everything is real.

Mental illness is what it is – an illness as any physical one. Despite the fact that a hereditary factor can increase a person’s chances for having one, it basically can happen to anyone.

Statistics is the following – one in four people suffers from a mental illness with a varied degree of severity nowadays. In the majority of cases the conditions are managed independently or with outside assistance; however, not always.

Surely, everyone heard about depression, or panic attacks. However, most of us have very vague idea of how a person with a problem looks like or how they really feel (provided that we have never experienced anything of the sort). The image of a mental illness we have (and especially it concerns severe cases of an ailment) is mostly created by the media; and it likes to paint things inaccurately, exaggerate, and in black and white.

However, these images are strong enough to enter and stay in our public consciousness. With mass media’s love to biased attitudes it is, again, not surprising that we learn to judge, fear and discriminate people with mental health issues. Taking into the consideration the fact that a considerable share of our knowledge about mental illnesses we acquire from mass media – Canadian research proved that). And so have other studies.

Being informed in an inaccurate way we often (consciously or not) support and are eager to accept stereotyped images of mentally disturbed people – and react negatively, and even hostile to them. All due to the lack of real knowledge.

1. We expect violence or any other type of dangerous behaviour from mentally disturbed people.

In accordance with the studies of the Center for Mental Health and Media at Massachusetts General Hospital Department of Psychiatry the latter are very often perceived in such a way. However, the same study showed that they are more likely to frequently become violence victims. Besides, a research from University of North Carolina School of Medicine found that “mental illness alone doesn’t predict violent behaviour” – while other variables such as age, or history of any addiction or violence, or else can serve as a certain decisive factor here.

2. We take all mentally ill people as unpredictable; and see it as a reason for fear in many cases.

These ideas are far from reality and in accordance with the author of “Media Madness: Public Images of Mental Illness” Otto Wahl from University of Hartford – mentally ill people are just ordinary people around us – this unpredictability prejudice is grossly exaggerated.

3. We see every mental health condition as a terminal thing.

This is also a result of very inaccurate understanding of the nature of a mental illness. Surely, there are severe genetic conditions that are beyond our control, however, there are other cases as well. With depression, panic attacks, OCD and so on progress is the key word. And while it is hard to see, we tend to ignore it and rest assured yet again with certainty about all treatment being ineffective.

However, the lack of progress does not prove the above statement. It might simply be a sign that a person needs to try some other therapy, or a therapist, or else.

Getting back to mental health depiction in various media, it is worth mentioning the authors who try to understand the people who suffer and create a more realistic, more truthful story of their mental and emotional state.

One interesting attempt at understanding people with mental illnesses is Shawn Coss, an illustrator from Ohio. His Facebook is full of the images depicting various mental health conditions such (e.g. Depression, social anxiety disorder, schizophrenia, bipolar disorder and so on.) The project was meant as a part of Inktober (an annual event that allows various artists creating a drawing a day for a periods of a month). 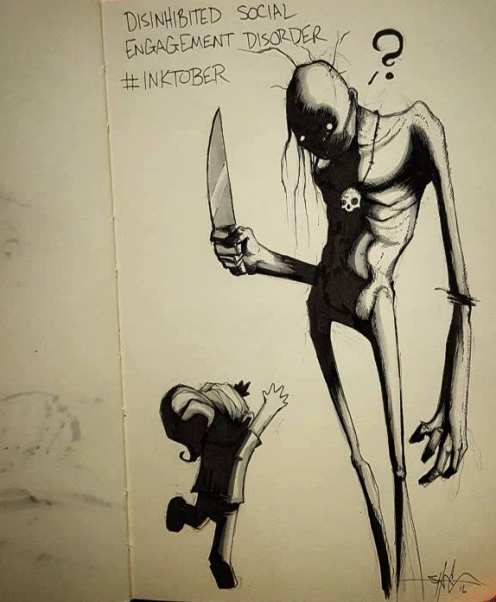 Shawn’s monochrome pictures were a success and received a great deal of feedback. People commented under the images and shared their feelings, the reaction was very positive and people admit recognizing themselves in these images.

The range of images depicts not only the most common cases such as depression and anxiety, but also more rare conditions such as disinhibited social engagement disorder and body integrity disorder.

Such a project might be a drop in the ocean (of all media) but it is a really great attempt to try and bring a more accurate image of a mental illness and advocate for its adequate perception. 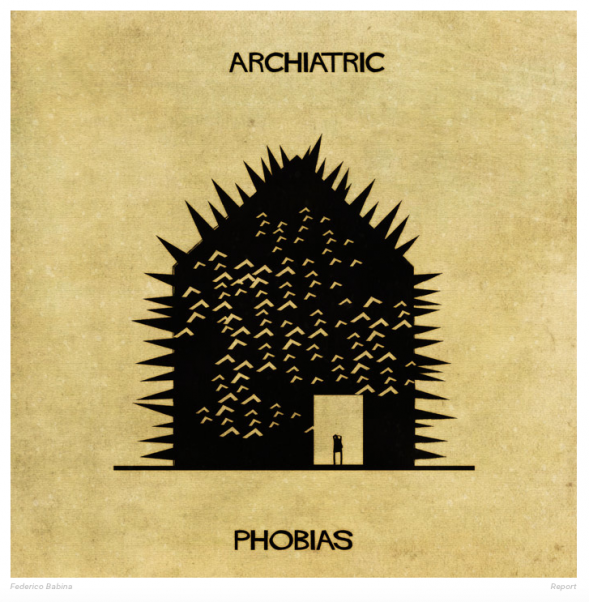 The project shows us 16 different mental health conditions as is they are different dilapidated houses, each of them with a different degree of destruction. The houses are abstract but the ideas behind them are pretty easily recognized.

The images compiled in one video can be accessed on the artist’s YouTube channel.

There is one more interesting approach to the issue of medical illness depiction and attitude – a “Help Guide” that comes in the form of a cartoon from Robot Hugs. It is a somewhat ironic answer and a set of tips for those who do not understand what a mental illness is and how to communicate (or better not to) with people who suffer from one. Perhaps, such eloquent attitude is not the best one, but it seems pretty comprehensive and effective. 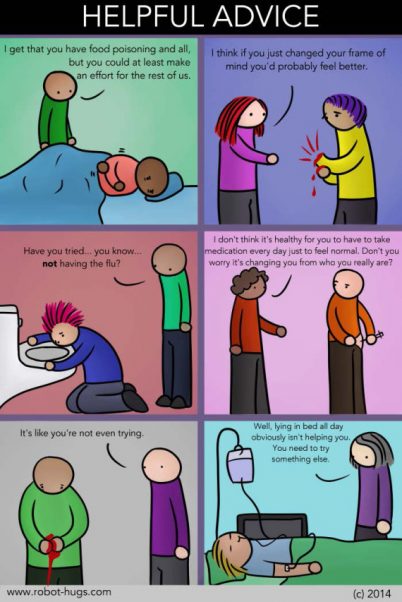 As it has been said, understanding a mental illness is not easy. Especially with all the mass media bias making it even less so. However, more sincere and accurate attempts are being made, and let’s hope, they will be fruitful as well as helpful – to people who suffer, so they could feel that they are not alone; to caretakers – to understand their patients better; to all general public – to be more tolerant and less prejudiced in their ways. These examples are only a few among many, however, it is great that they appear and inspire others to follow in their wake.