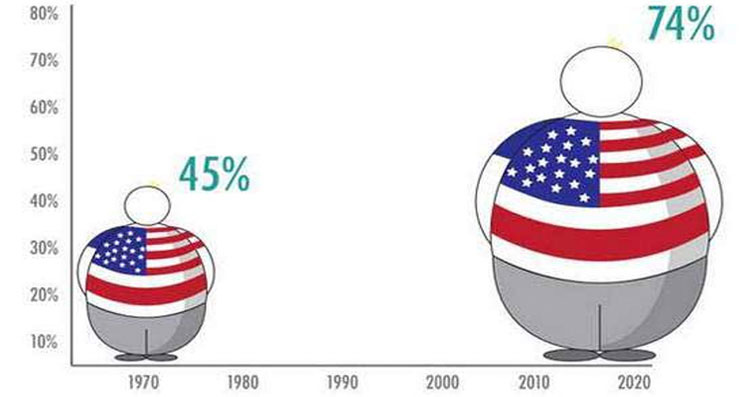 However sad to admit but obesity is a real problem in America. Since 1980s the rates for overweight adults have become higher, and the ones for kids tripled. Obesity is now compared to epidemic so wide-spread the condition has become. This is a serious condition as it affects not only the way person looks but also his or her health in general. For the United States it is a national problem as a country having half of its people being will not be able to sustain its development and growth. That is why there are so many measures taken in order to educate people and teach them how to lead a healthier lifestyle.

Apart from hereditary, there are several combined factors causing obesity: unhealthy diet, overeating and lack of exercise. This may seem strange taking into consideration the fact that obesity is frequent condition in America and Europe, where in health care and health related food products are so well-developed issues.

The reasons are actually simple. Food attitudes play a very important role in this aspect. The thing is that the ideas of healthy eating can vary and all in all it is not always possible to follow the simple (or so they seem) rules of healthy eating. Fresh (and possibly homemade) food that is low in trans and saturated fats that is consumed in small amounts and with frequent intervals – easier said than done. Our lives are nowadays too hasty to not to rely on ready made meals and fast food. However, the latter, together with processed and junk foods are the reasons of our poor health and problems with weight for the most part. People withy busy schedules, involved in emotional eating and the ones crazy about fad diets are the ones to develop the unhealthy condition first. Alcohol lovers are in this group as well.

The other reason that leads to obesity is lack of activity. Really, western society, so-called developed countries have got nowadays so many breathtaking technologies that are able to make life such an easy and pleasant thing at the same time receive this backfiring effect. Lack of simple physical activity is not beneficial for our organisms. Calories and fats are not burned as they are supposed to be but are stored instead creating the unwanted and ugly fat deposits. People have stopped to walk – whey drive. Kids stopped to play outdoors – they watch TV or play computer games instead. If you think about it, there is no surprise that kids obesity rates have increased to such extent in recent decades. An average American got used to such sedentary lifestyles and finds it harder and harder to break this vicious circle.

Genetically predisposed to obesity people will find it harder to fight the condition. However, just the fact that they inherited this predisposition should not stop them in their desire to lead a healthy lifestyle. And this should be done not only because their mirror image does not appeal to them. Obesity is fraught with the risk of development of different ailments, some of them are really very serious: cardiovascular diseases, Type-2 diabetes, cancer, gallbladder disease and so on.

RTI International, the Agency for Healthcare Research and Quality, and the U.S. Centers for Disease Control & Prevention have carried a research according to which the medical expenses of obese people have reached $147 billion annually. This is something to think about, something to consider and take some action.