No, autism is not encouraged by a worldwide three-in-one MMR (mumps, measles and rubella) vax. The myth that vaccination is coherent to autism derives from a notorious scientific article. Later the magazine retracted it because its author had been caught in a deception. 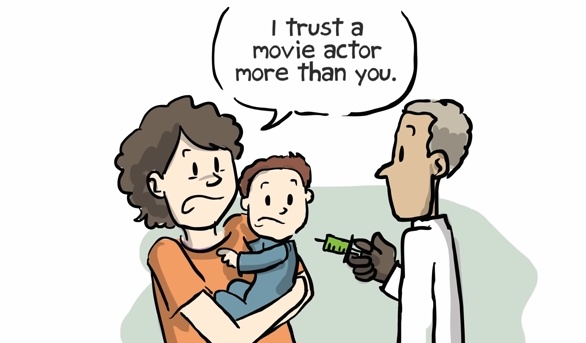 How it All Started

The whole fuss that autism disorder and MMR shot are somehow connected was started by Andrew Wakefield in a sensational research work released by the Lancet in 1998. Wakefield`s research was based on the charts of 12 infant patients observed at the Royal Free hospital and admitted within 8 months in 1996-1997. The paper contains the statement of the majority of parents of the overseen children describing that MMR had suddenly provoked losing of behavioural skills and they noticed the first obvious deviations during 14 days after the shot.

While Dr. Wakefield pushed for separating the MMR and production of single shots for each disease, the showings of vaccination in the UK went into freefall. His interview at the conference devoted to autism that he attended in 2000 in America gave rise to a stormy movement against all vaccines. However, Brian Deer, a reporter assigned to look into the increasing crisis, revealed true intentions of Wakefield, which were standing far away from taking care of children.

In his triumphant fact-finding Brian Deer traced that Wakefield had been paid on the quiet to besmirch MMR concealing and misreporting information concerning the children in his research. In sober fact, Wakefield closed a deal with Richard Barr, a lawyer, who wanted to hit the companies producing the triple shot by class action lawsuit. What is more shocking, the doctor had a selfish plan to start selling his own vaccine (that he presented as a “safer” option) against measles having filed a patent on it together with other products designed to “cure autism completely”.

In 2002 Dr. Kreesten Meldgaard Madsen and his co-authors from Denmark did not discover any influence of MMR vax on pathogenic mechanism of autism in terms of children`s age and time after immunization was done. They took the reports of the National Board of Health as the basic for their study together with the data from the Danish Psychiatric Central Register.

The vaccination programme of MMR in Finland started in 1982 and it was followed up for 14 years. In 1996, the researchers recordered 173 eventually high consequences out of 3,000,000 given shots. Specifically, the most prevalent complication was febrile seizure that could become the cause of the factors as the report claims.

The Cochrane Collaboration`s group of authors (Demicheli and co-authors) discovered that inoculation with MMR shot and autism are not connected. The researchers prepared a streamlined review analyzing the strength and safety features of the shot along with complicating disorders. Their research has been presented in the European Paediatric Association’s Official Journal.

The Cochrane team has collected and systemized results from a vast range of researchers that covered in total more than 14,000,000 children from different countries. For example, in 2001 Fombonne came to the conclusion that pervasive development disorders (PDDs) did not become more frequent after MMR and autism regression was not more common, having tested connection between the vax and PDDs.

Uchiyama made the same inference in 2007 when he assessed if exposure to MMR made autistic spectrum disorders (ASD) regress. He studied infant patients of the Yokohama Psycho Developmental Clinic with an ASD diagnosis and he did not discover any significant deterioration of the patients after they had received the shot.

Obvious results of international analysis of connection between the MMR inoculation and autistic disturbance performed for the past 20 years in various developed countries prove that there is no association between the shot and PDDs.