There is a lot of conversation both in the scientific community and among ordinary citizens about sudden changes in women’s cognitive capability taking place during pregnancy. This refers to occasional memory problems and outbursts of absent-mindedness sometimes called ‘pregnancy brain’. There is an opinion that pregnancy impairs the brain irreparably. Does it? 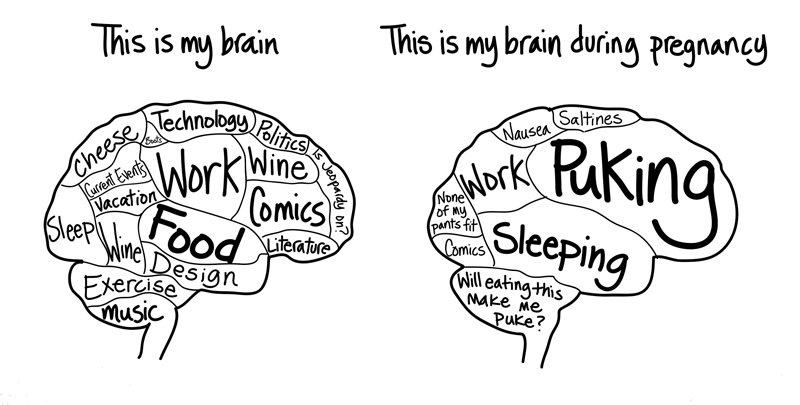 Is it really that grave?

There is an opinion that pregnancy claims a share of the brain’s gray matter. Research held by the team of the Autonomous University of Barcelona, published in Nature Neuroscience, says: pregnancy exerts influence on the brain, which continues throughout pregnancy and for at least two years past birth. But no evidence of memory deterioration has been found. What really happens?

Some findings suggest that during pregnancy a woman’s brain undergoes changes similar to those observed at the stage of transition from puberty to adulthood. The study involved 25 first-time mothers, a group of first-time fathers and a group of childless women and men. All participants underwent a computer tomography. Brain scans revealed a decrease in the amount of grey matter in regions responsible for social activities. Interestingly, these same areas lit up during later examinations, to indicate a woman’s physiological concentration on her relationship with her (future) child. There was also a task, in which women were to look at pictures of their own and someone else’s babies, and put their brains for a check. In the former case, the areas of the brain, where the grey matter had changed, lit up again. In the latter, they did not.

Grey matter is located close to the brain’s surface and is home to areas, which regulate the cognitive functions, such as problem solving, memory, learning, etc.

No reason to worry!

Although grey matter reduction does take place during pregnancy and motherhood, none of the brain’s capacity is lost. There are two reasons for it. First, pregnancy triggers production of progesterone, estrogen, and oxytocin hormones. According to Louann Brizendine, head of the Women’s Mood and Hormone Clinic at the University of California, concentrations rise by scores of times and affect brain cells. Happily, they do not kill them, but just reprogram their functioning. Changes taking place in grey matter consist in removal of connections between brain cells, which are no longer in use due to the priority shift. This process is referred to as ‘synaptic pruning’.  Mother Nature says: “Now this is your sole business in life and I’m here to switch your memory to what you should be doing instead of what you want to be doing!” Simply put, a natural mechanism is launched to free pregnant women from the necessity of thinking about and doing things other than giving birth and caring for their children. Indeed, once a woman gets pregnant and/or finally gives birth, her life gets a dozen of times more complicated. No wonder, she has to sacrifice a good share of matters she had been focusing on before getting pregnant. Sleep loss is just another contributing factor. You cannot stay sharp after a sleepless night. This is the second reason, which, in a way, arises out of the first one.

It will not take any part of your brain, just switch it off for a while!

These studies pretty much dispel the myth, which says that pregnancy and parenting damages the brain. As follows from the above, the reduction of grey matter is nothing less than a natural adaptation for the oncoming new reality. It does not take a scientific experiment to understand how busy a woman gets once she has a child. The change in grey matter does not impair her memory. It just switches it to things that are now most important in life. That’s it!