Hopefully, you've only ever had to witness a heart attack in a film and not in real life. Such scenes usually follow the same outline: a seemingly healthy character suddenly goes pale, gasps for breath, and clutches onto his or her chest, then falls on the floor. This makes a heart attack seem like a matter of seconds, without any prior signs. In real life, however, it is quite different. 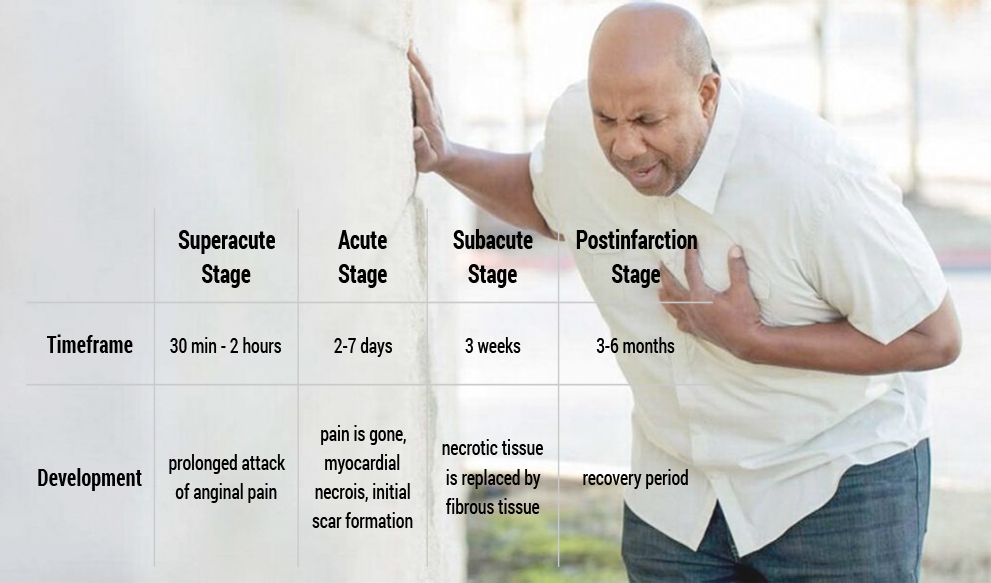 A heart attack (or a myocardial infarction) is not a bullet that kills instantly: it has its early signs and a preceding period that can last for weeks, and then the infarction itself has several stages. Let’s look at those stages and their duration.

That’s when an artery, already severely constricted due to atherosclerosis, finally gets blocked, and a part of the heart muscle stops receiving oxygen (this deprivation of oxygen is called ischemia).

The main symptom is crushing, unbearable pain in the chest that often spreads into the left shoulder and arm, up into the left jaw and down into the abdomen, known as angina. The victim of a heart attack cannot breath (dyspnea) and is overcome by fear. During this stage, the heart cells are dying. Sometimes, however, it is not the chest pain, but rather a sudden pain in the abdomen, nausea, and vomiting that are the symptoms of an infarction, while among old people breathlessness is common. And many diabetics (a group of high risk for infarction) go through a heart attack without pain!

Once an area of the heart muscle dies (in case of a serious infarction, it is over 1 cubic centimeter), an inflammation process begins. White blood cell count rises (their function is to remove dead tissue), and so does body temperature; plus, body produces special enzymes, which can be used in lab tests to determine if an infarction has indeed occurred. This is also called the stage of myocardial necrosis. Special cells, called myofibroblasts, start building new collagen fibers – a scar begins to form.

In this stage, the patient needs rest, additional oxygen supply, and analgetics. There are risks, too: the infarction may expand, leading to new bouts of angina; heart failure and aneurisms do happen, too (more info on complications here).

Subacute stage (up to 3 weeks)

This is when the initial scar fully forms. While heart tissue can never regrow, a robust scar will at least allow the heart to keep pumping blood. The current research tends to focus more on growing better scar tissue rather than on trying to find a way to regenerate the muscle itself. Unfortunately, natural scars often turn out to be too stiff and thick; while on the other hand, some groups of people have trouble healing woulds and forming scars at all. They are, first and foremost, diabetics who suffer from ulcer and people with Ehlers-Danlos syndrome (malformation of collagen). You can learn more about post-infarction scarring here.

As you can see, it is not easy to determine the exact length of a heart attack: while the process of cells’ death lasts for up to two hours, the following stages are integral parts of the process. Thus, we can say that an infarction can last a week or more!