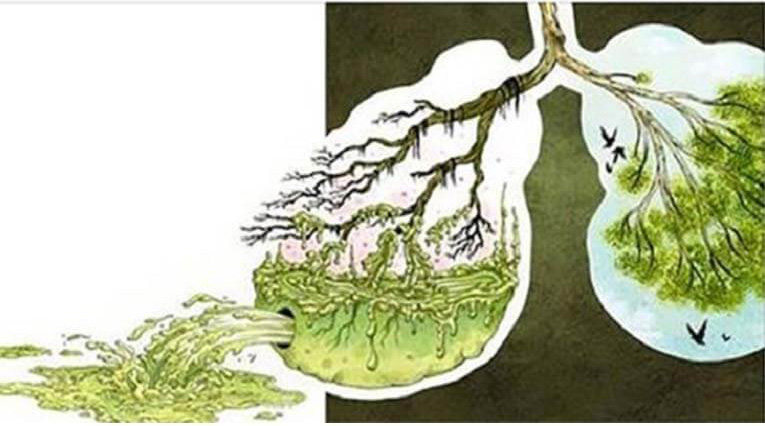 First, let’s define what mucus is. In fact, this is a sticky fluid produced by mucous membranes lining the walls of body organs like ears, lungs, stomach, respiratory tract and genital areas. This liquid has antimicrobial compounds useful for destroying different pathogens, for instance bacteria. Thus mucus defends the body against harmful agents. A healthy organism produces about 1.5 liters of mucus every day.

Signs of Mucus in Lungs

There are several symptoms related to this health problem. Coughing with greenish-yellow mucus is a frequent sign of mucus in lungs. Excessive mucus causes sore throat and difficulty breathing. Mucus in lungs can trigger various breathing disorders.

Bronchitis is a respiratory problem when the bronchi which allow the inhaled air to move into the lungs and serve as a passage for carbon dioxide to leave the body, get swollen. Bronchitis is triggered by viral or bacterial infections. Due to the inflammation process the mucus membrane produces more mucus to control the infection. The mucus accumulation causes frequent cough and breathing problems.

Asthma is a lung disorder provoking inflammation in the airways. It is often accompanied by excessive production of mucus. Asthma attacks evolve serious airway obstruction and breathing problems.

Sinusitis may also cause mucus in lungs. In fact, sinus is a hollow cavity allowing air to enter the nose and move to the windpipe. The mucus membranes in sinuses release mucus to filter dust and dirt. The mucus does not allow the unwanted particles to reach the lungs. Bacterial infections can trigger inflammation in the sinus activity resulting in clogged sinuses. The mucus produced in sinuses, can move to the lungs disrupting their normal functions.

Pneumonia can often be the cause of mucus in lungs. It is an infection caused by bacteria, fungus or virus that damages the lungs. As pneumonia aggravates, the respiratory tract reacts by producing more mucus in lungs. Patients with pneumonia cough frequently as the body tries to remove excessive mucus.

Emphysema is a disorder usually characterized by destruction of alveoli. Alveoli are air sacs found in the lungs which are responsible for transferring the inhaled oxygen to the blood flow and removing carbon dioxide from the body. In the early phases of emphysema, alveoli become inflamed, which prevents normal exchange of carbon dioxide and oxygen. Air pollution and smoking are the main causes of emphysema. Healthy alveoli are elastic however emphysema impairs their elasticity. Consequently, the alveoli cannot eliminate carbon dioxide from the lungs. The accumulation of harmful substances triggers excessive production of mucus in lungs which eventually leads to constant coughing and difficulty breathing.

Treatment Options for Mucus in Lungs

As a matter of fact there are various options for treating extra accumulation of mucus in lungs. Actually, mucus disorders which provoke shortness of breath can be taken under control by the use of special medications. Visit your doctor for proper diagnosis and to find out what treatment options are required for your condition.