Once considered essential foods, dairy products are now demonized due to high levels of saturated fats. Regardless of whether milk fats are actually harmful, there is another reason to keep your consumption of dairy moderate: bovine leukemia virus, with which virtually all cows in the U.S. are infected, could be associated with breast cancer in humans, though the evidence is very limited.

One of the most common viruses in cattle, bovine leukemia virus affects nearly all cows in the U.S. While the prevalence is extremely high and the virus may contribute to development of cancer, not all infected animals develop the disease caused by the virus: only 5% of cows with BLV in their cells have leukemia, and around 30% are diagnosed with lymphoproliferation.

Can humans be infected?

For many years, people had thought that humans cannot be infected with BLV, as their then-advanced techniques did not manage to reveal antibodies to the virus, until a new piece of evidence emerged, which shed light on the issue and found that BLV is capable of inhabiting humans.

In 2003, a study aiming to detect antibodies to BLV in humans was carried out. To everyone’s surprise, it turned out that many of the blood samples provided by 257 volunteers had such antibodies.

However, it is not the only evidence suggesting humans can also be affected by BVL. The aforementioned study found that the human body can produce antibodies to the virus, but it remained unknown whether the virus can be found in human cells. To find it out, a team of scientists from University of California and Ohio State University analyzed 219 breast tissue samples and found that the virus was present in 44% of them.

Given the ability of the virus to infect humans, it is a matter of great concern that the virus is present even in the milk of carrier cows, which means a human being can become BLV-positive if they drink unpasteurized milk or eat poorly fried beef.

Is it linked to breast cancer?

Now that we have looked at the studies that aimed to find out whether humans can harbor the virus at all, let us turn to the issue of its relation to breast cancer in humans.

In 2015, an attempt was made to establish an association between breast cancer and the virus in question. The study was conducted by the same team that worked on the analysis of breast tissue samples. This time, they took 239 breast tissue samples and looked for BLV in them. They divided the participants into two groups, namely patients with breast cancer and those who did not suffer from the disease, and compared the virus prevalence in both groups. The results were statistically significant: in controls, the virus was found in 29% of samples, while in the group of women with breast cancer the figure was much higher (59%). 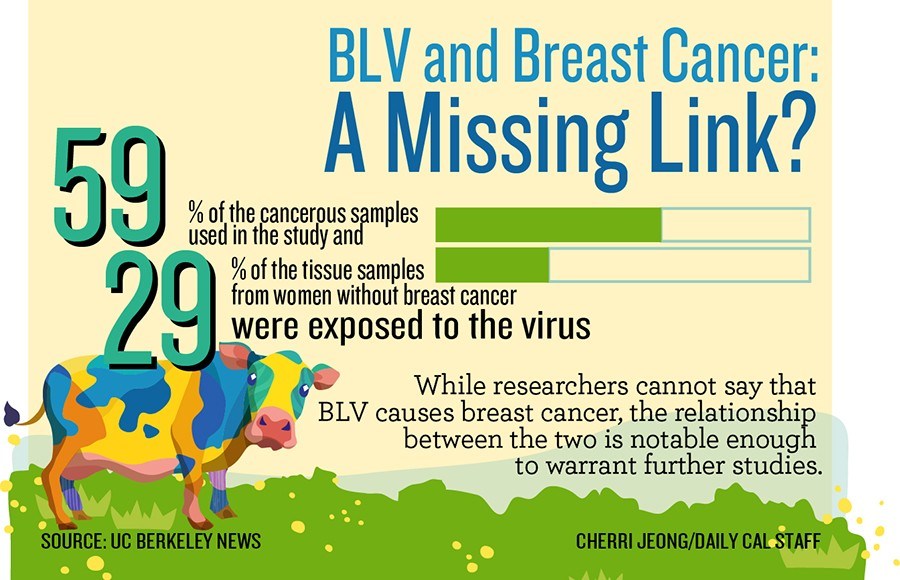 However impressive this study may seem, no other team managed to reproduce the results or came to the same conclusion that BLV is associated with breast cancer in humans. Other researchers tried to find the association, but all their attempts failed, and no association was established, so the findings of the 2015 study cannot be considered conclusive.

Is it a reason for panic?

The bottom line is that there is no evidence that BLV, with which humans can be infected, causes breast cancer, and while there is limited evidence pointing to it, other studies found no association. Still, the virus can be transferred from cattle to humans, so reasonable precautions are necessary.

These include drinking only pasteurized milk and frying beef properly. These rules are applicable to anyone regardless of BLV, as they are aimed to prevent infection with other microorganisms too, not just the virus under discussion.