Atherosclerosis is often caused by smoking, excessive fat consumption, and lack of physical activity, coupled with emotional and mental strain and stress. This can cause a buildup of fat deposits – atheroma – on the arteries walls, which harden and calcify with linte preventing the arteries expansion and contraction. The term used to describe arteries hardening is arteriosclerosis.

Hardened arteries become “furred up” and restrict the blood flow to other body parts. The tissues and organs are affected and cannot work properly. In the end, if nothing is done, the arteries are blocked, and the blood cannot reach the vital organs. If this happens in the arteries which are found around the heart, this may cause a heart attack. If the arteries found in the brain are blocked, this can trigger a stroke.

Alternative treatments for atherosclerosis in combination with proper psychological and physical approaches have been shown to stop and even reverse such a serious problem as atherosclerosis. Especially successful are those that involve a well balanced diet with exercise, food supplements, massage, yoga, counseling, relaxation therapy, and some other “talking treatments” related to social support. As a matter of fact, most ways of heart disease prevention are effective for managing it as well. Actually there are other therapies that might work for you.

Diet and nutrition fiber is very advantageous for the body, in particularly a water-soluble form that is present in pulses and oats, as far as it decreases excessive cholesterol. The same effect can be reached by adding ginger to your dishes.

In fact, ginger, herbal medicine garlic, hot red and chili peppers, alfalfa and yarrow herb are known for the ability to lower the blood stickiness and clotting prevention. Also they are capable of dissolving atheroma which is already found in the arteries. In fact hawthorn berries possess similar ability.

Chelation therapy represents a controversial treatment, which is mainly popular in the US. Actually a synthetic amino ethylenediaminetetracetic acid is used there as an ingredient of anticoagulant drugs to dissolve atheroma and remove it from the body. As a matter of fact this treatment can be performed only by professional doctor as it is a long-term injection procedure. The good news about this method is that there is efficacy evidence. However there are still certain doubts about its safety and the treatment is still being investigated. 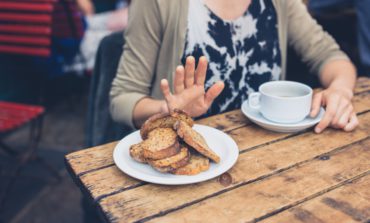 Study Finds that Your Heart will Suffer if You Skip Breakfast