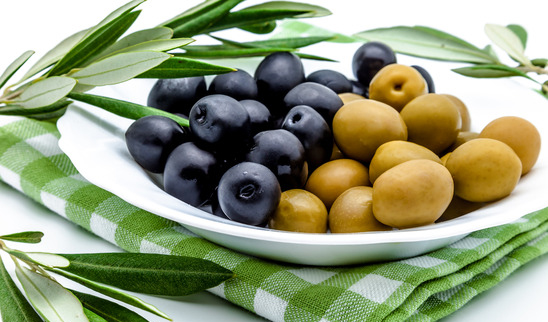 First off, the vast majority of the olives that you buy are picked unripe – that is, green. Olives that ripen on a tree do turn purple, but you cannot preserve them – they are simply too soft and would turn into a sort of porridge. To make green olives in a jar, they are pickled in strong brine for several months and then bottled cold: high salinity prevents bacteria from growing, so such jars can be kept for years outside of the fridge. But what’s the story with black olives in cans?

The story begins around 1890 in California, where a enterprising German lady named Freda Ehmann owned an olive grove. At that time, olives were only used to make oil, but Freda wanted to try and pickle them; and some researchers from the University of California provided her with a new recipe that consisted of curing olives in a solution of lye. This process included oxidation and the addition of iron salts: that’s what turned olives black. Thus, they were ripened artificially! Freda started putting them in glass jars and selling them, and soon many others followed her example: the era of the California ripe olive had begun.

The problem was that this lye-induced process did not protect from bacteria, and soon people who ate the black olives started dying of botulism (if you want to know how they determined the culprit, see here). The only way to make black cured olives safe was to heat them to over 200 degrees, which could not be done in a glass jar: only metal could withstand such pressure. And the solution was… a tin can!

So now you know the story: olives are picked green, but some are pickled in brine and some are artificially ripened (but not dyed with any black colorant). But let’s ask another question: why are some olive oils green and some yellow, and do they differ in taste?

The simple answer is: the riper the olive, the more golden the colour. In general, olives are picked quite green in Italy, thus pure Italian oil will be emerald-green, with a slightly bitter taste that burns the throat; it has high levels of cycloartenol – a compound that may help lower cholesterol in the blood (more details here) . In Greece, olives are picked unripe, too, resulting in grassy-green colour. Greek oil is rich is antioxidant compounds called polyphenols that slow aging (see this study). In Spain, which produces 45 per cent of all olive oil in the world, olives are harvested ripe, thus the colour is golden and the taste is fruity and not bitter at all.

One thing to remember about Italian olive oil is that bottles marked as “made in Italy” usually contain oil from all three countries: per capita consumption in Italy is so high that domestic production cannot satisfy it, so oil from Greece and Spain is imported, and the final mixing and bottling is done in Italy. It is not bad, of course: you get a balanced blend of tastes and all the health benefits, most of all the reduced risk of cardiovascular disease. The important thing is that it should be virgin or extra-virgin (that is, not treated with heat or chemicals): this way you can be sure that you are getting all the vitamins!