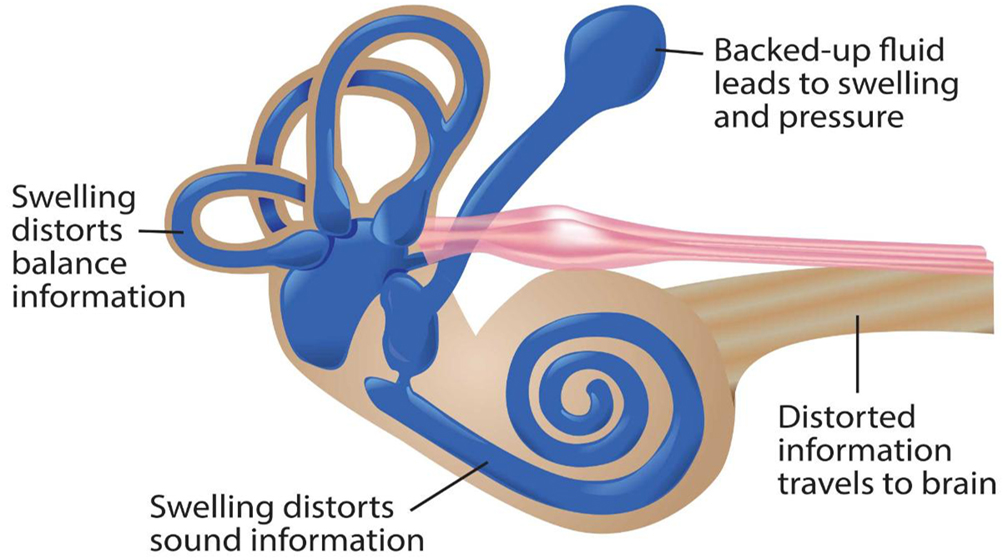 Meniere’s disease was first introduced as a recognized ailment in 1861. It is considered as an abnormality of an inner ear. It is characterized by the following symptoms:

The labyrinth is the part of an inner ear consisting of two parts in its turn. They are the membranous labyrinth and the bony labyrinth. The former serves for the purposes of hearing and balance. It is encased by bone and filled with a endolymph. When your head moves, this liquid in the ear also moves and therefore brain understands that there is motion actually. However, in case the level of endolymph increases, it makes the membranous labyrinth to dilate and a condition of endolymphatic hydrops occurs.

Besides endolymph there is also perilymph in the inner ear. One of the most popular Meniere’s disease causes is considered the mixing of these two fluids. However, the exact cause of the condition is still unknown and is investigated. Some scientists presuppose that it can happen after a head injury. Infections and syphilis are also supposed to be among probable Meniere’s disease causes. Besides, a condition can be triggered by other factors as allergies, alcoholism and smoking, fatigue and stress, respiratory or any viral infection, some medications are also capable of causing it.

It is characteristic for the condition that is happens usually out of a sudden.

Moreover, the symptoms can manifest themselves frequently but also they can be very rare (once a year, for instance). It can start with tinnitus and roaring and buzzing and proceed with diminished hearing and pressure buildup the ear and in the head. Vertigo is one of the distinct symptoms of the condition. It is characterized by the nauseated sensation as well as vomiting and sweating.

Meniere’s disease causes are different but they start unexpectedly and last for several hours; which is not exactly very pleasant. It is the best case scenario if a person experiences such problems only several times a year. In case when intense tinnitus happens during sleeping. However, when it is continuously and frequently happening condition accompanied with hearing loss and a tendency to worsen, there is something to be done about it. In rare cases the ailment can be also accompanied with headaches and diarrhea.

Meniere’s disease causes are not exactly known and there is also no exact cure for it.

That is why most of the therapies are aimed at alleviation of the symptoms associated with the condition. Among the most frequently offered options are dietary changes and drugs administration. Among the medications it is mostly anti-allergic ones. Thy influence the circulation of blood in the inner ear and therefore are believed to help to some extent. Fluid pressure in the inner ear can also be relieved by the administration of diuretics. Major lifestyle changes such as healthier diets and more active pastime can, however, be more effective among other treatment options.

Debilitating vertigo can be also helped with some surgical procedures. One of them is Labyrinthectomy and it is the removal of the inner ear. However, this surgical method can be used only with patients with hearing problems as this operation actually causes hearing loss. Vestibular neurectomy in its turn represents a selective severing of a nerve from the affected inner ear organ. It is a pretty risky surgery but it is worth the risk there are more chances that hearing will be preserved. Nowadays other option is widely used – gentamycin, which is ototoxic antibiotic, is administered right into the middle ear space. It is believed to be very effective and as long as Meniere’s disease causes are unknown the only safe treatment option.

Meniere’s disease makes suffer about 0.2% of the US population. It is not a very frequent and still not studied well bit hopes are that it will soon be and a lot of people will be helped.