Sometimes, when you are on a long train trip, or hiking and camping, or exercising hard, you just need a protein-rich snack that can replenish your energies and doesn't have to be refrigerated. One such snack is jerky - dried and cured meat, which has recently started to fill supermarket shelves... and to generate considerable debate. 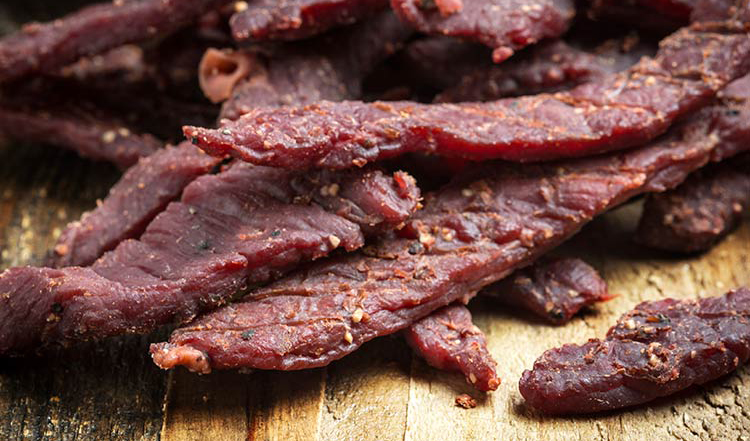 The secret of drying meat has been independently discovered thousands of years ago in various regions of the world, including Peru, Mongolia, and South Africa, and jerkey has been made of all kinds of meat, from turkey to donkey. However, nowadays it is beef jerky that you most commonly find in the stores. It comes in a myriad of varieties, with various sauces a levels of heat.

It’s not all about the protein

Let’s give credit where it’s due: jerky does contain lots of protein – a whopping 33 grams per 100 g, the recommended daily values being around 45 g for women and 55 for men! But does it mean that just by eating 150 grams of jerky per day you can stay fit and healthy? Well, not really.

First of all, those same 100 grams of jerky will give you 40% of all your daily fats, including 55% of saturated fats. While fatty acids are essential for building cell membranes and for brain function, saturated fats have actually been linked to reduced brain function, and also to heightened risks of heart disease and stroke.

Second, 100 grams of jerky contain over 2 g of sodium (which we usually just call salt, though table salt contains only 40% sodium), which constitute 86% of the daily value! Most processed foods are high in sodium, and people in the West routinely eat twice more sodium than necessary. Excess sodium causes the body to retain water, increasing the risk of high blood pressure, stroke, and heart attack .

On the brighter side, jerky does contain lots of iron, vitamins B6 and B12, phosphorous, and magnesium. But all those nutrients can also be found in fruit, vegetables, seafood, etc.

All hope is not lost, however. Recently the selection of jerky-like products has increased to include varieties that are much better (if not actually good) for you.

South African jerky, or biltong, has been taking jerky-lovers by storm. It is made using vinegar, not just salt and spices, and is air-dried for several days (as opposed to several hours for normal jerky). 100 g contain only 6 g of fat (vs 25 g in jerky) and 48 g of protein (vs 33 g). However, sodium content is just as high.

Another alternative would be turkey jerky. It contains very little fat (less than 5g) and even more protein than beef jerky. Plus, lean poultry meat is easier for the body to break down. On the downside, you still get all that sodium!

Of course, there is also vegan jerky, based on soy or seitan. While still quite high on protein (40g on average), and with little fat and zero cholesterol, it has the same sodium problem as others.

Finally, you can make your own jerky (or something similar) at home, by drying thin slices of beef in the oven for 3-4 hours. In this case, you can substitute soy sauce for salt and create your own spice mix!

So what should you do? If you have to scale a mountain or spend days trekking in the woods, then by all means, stock up on some jerkey; when it comes to quick protein supply, it’s one of your best bets. But no matter how delicious it is, better avoid making it your staple snack when you watch TV or hange out with friends – think of your blood vessels, your kidneys, and your heart.