From time to time, we all experience digestion issues: belly pain, bloating, discomfort, and even spasms. It is extremely unpleasant but usually temporary. However, according to data, over 10% of the worldwide population have to live with a chronic disorder called IBS (Irritable Bowel Syndrome), which means they experience these symptoms everyday, but without any detectable underlying disease. 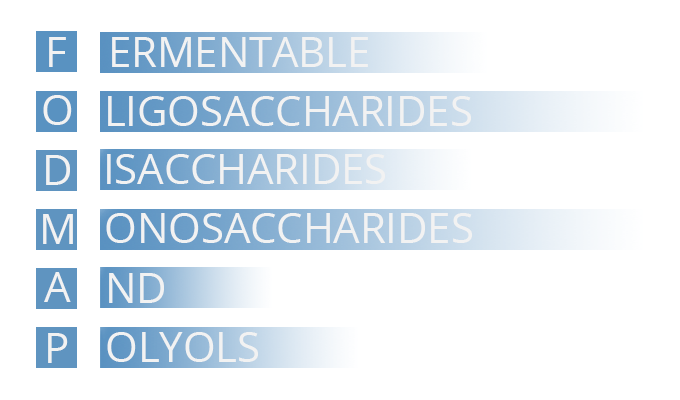 For a long time, IBS was a mystery, but now it seems that a solution may exist – the so-called low FODMAP diet.

Unlike so many fad diets created by fitness & beauty coaches, the concept of low FODMAP diet has been devoloped by researchers from Monash University in Australia. The acronym FODMAP means a particular kind of carbohydrates and stands for Fermentable Oligosaccharides, Disaccharides, Monosaccharides and Polyols. According to the scientists, these small carbohydrate molecules can be fermented (rather than properly digested) in the large intestine, producing CO2, hydrogen, and methane; these gases, in turn, cause expansion and bloating. This helpful video explains the basics of IBS and FODMAPS

Unfortunately, FODMAPs are found in many common food groups: for example, lactose (milk and dairy), fructose (fruit), and galactans (peas and beans) are all FODMAPs.

The most important thing to remember is that low FODMAP diet is designed to heal the intestine, not to lose weight. Since it requires excluding many essential food groups, it is strictly temporary and lasts from 3 to 8 weeks.

For three weeks, all FODMAPS have to be excluded, and then gradual reintroduction begins – one food group at a time. Thus, not only the large intestine gets enough time to heal, but the patient can determine which subgroup of FODMAPS causes his or her symptoms.

After the dieting period is over, the patient will need to try and replace foods with high level of FODMAPS with alternatives – for example, oranges and bananas instead of apples and oats instead of rye (many more can be found here.)

A study conducted in Australia has shown that after just one week of low FODMAP diet, patients’ IBS symptoms have reduced by 50%.

Another study by Monash University has shown that up to 86% of patients have felt significant improvement after three weeks on the diet.

Even if you do not suffer from Irritable Bowel Syndrome, but only occasionally experience bloating, gas, and abdominal pain, remember that it can still be FODMAP-related.

Try to determine which foods give you problems and check if they belong to a high-FODMAP group; and if so, try to find out if these foods can be cooked in a way that reduces the negative effect. For example, beans and other legumes have a reputation for creating gas, but it can be rectified by soaking them in water overnight.

Though the concept of low FODMAP diet is rather new and more research is needed, it is clear that it’s worth trying by anyone suffering from IBS. However, the diet is demanding; thus, before you embark on it, make sure to study additional materials on the topic. Apps, shopping lists, recipe books and whole sample menus for low FODMAP diet have been developed and are available online.